ESG risk: the stakeholders are coming

We’re heading into proxy season. And that means a barrage of shareholder resolutions on top of all other stakeholder pressure on businesses.

Organisations would be wise to shore up and get ready for these. Activist investors are wielding their power and asset managers – under ESG pressure themselves – are saying they’re going to further hold companies to account on issues ranging from climate change to diversity and inclusion plans. Earlier this year, climate-focused shareholder proposals were already up 88%.

A few examples: Goldman Sachs Asset Management recently said it will target directors at firms that are failing to release adequate emissions data. Royal Bank of Canada (RBC) is facing pressure from investors who have filed a resolution that would prevent it from supporting fossil fuel projects. ShareAction has recently coordinated a climate resolution at Credit Suisse with the support of 11 institutional investors, urging the firm to set short-term targets on lending related to fossil fuels and to align its fossil fuel strategy with leading practice in the sector.

And, in a move analysts say will be adopted by others, BlackRock is now offering its institutional investors greater voting powers.

You get the picture. And these campaigns are becoming increasingly successful. Last year, in a same-day trifecta for stakeholders against Big Oil, activist investor Engine No.1 won seats on ExxonMobil’s board, despite controlling just 0.02% of the company, Follow This forced Chevron to take action to reduce its Scope 3 emissions, and a Dutch Court ordered Shell to increase its emissions-reduction plans.

It's not just ESG. Activism is generally on the rise. According to Bloomberg data, London-listed firms with a total market cap above $500bn are experiencing a surge in investor activism, following shareholder discontent at underperforming companies. Speculation about Trian Partners’ intentions at Unilever has been accompanied by other major campaigns – for example, Elliott Advisers pressuring SSE to spin off its renewables arm, Cevian targeting Vodafone and Causeway Capital looking to shake up the board at Rolls Royce.

Staff are another group to consider, with workers also increasingly putting pressure on organisations to take action over environmental and – what is of course particularly relevant now – geopolitical issues. For example, dockworkers in Cheshire refusing to unload Russian oil.

How organisations respond risks not just their ability to retain talent, but also their reputation. It’s a tricky balancing act. BP’s share price was surprisingly not ultimately affected after it unloaded its shareholding in Russia’s Rosneft following political pressure to do so.

But, what about essentials for citizens of the country? Danone has said that, while it will suspend investment in Russia, it will continue doing business and still has a responsibility to the people it feeds and who depend on them. Accenture’s decision to close down it’s 2,300 person operation in the country came with its own issues, particularly for the local workforce.

Stakeholders represent an additional layer of risk for organisations and they need to be taken seriously. Responses to unpredictable events are now compounded by how they’re perceived by the broader community. In the world of ESG and stakeholder activism, keeping an eye on this growing trend is becoming ever more important. That's exactly what RADAR enables risk analysts to do.

RADAR is a state of the art Analyst Research Platform, built by AYLIEN and powered by our industry leading AI. Using RADAR's intuitive UI, analysts get access to over 90,000 sources from around the globe, with every article categorized and tagged by our natural language processing (NLP) engine, making event discovery and investigation exponentially more effective and efficient than traditional analyst workflows, as well as making it easier than ever to notify stakeholders of potentially critical events. Try it for yourself by requesting access to RADAR here. 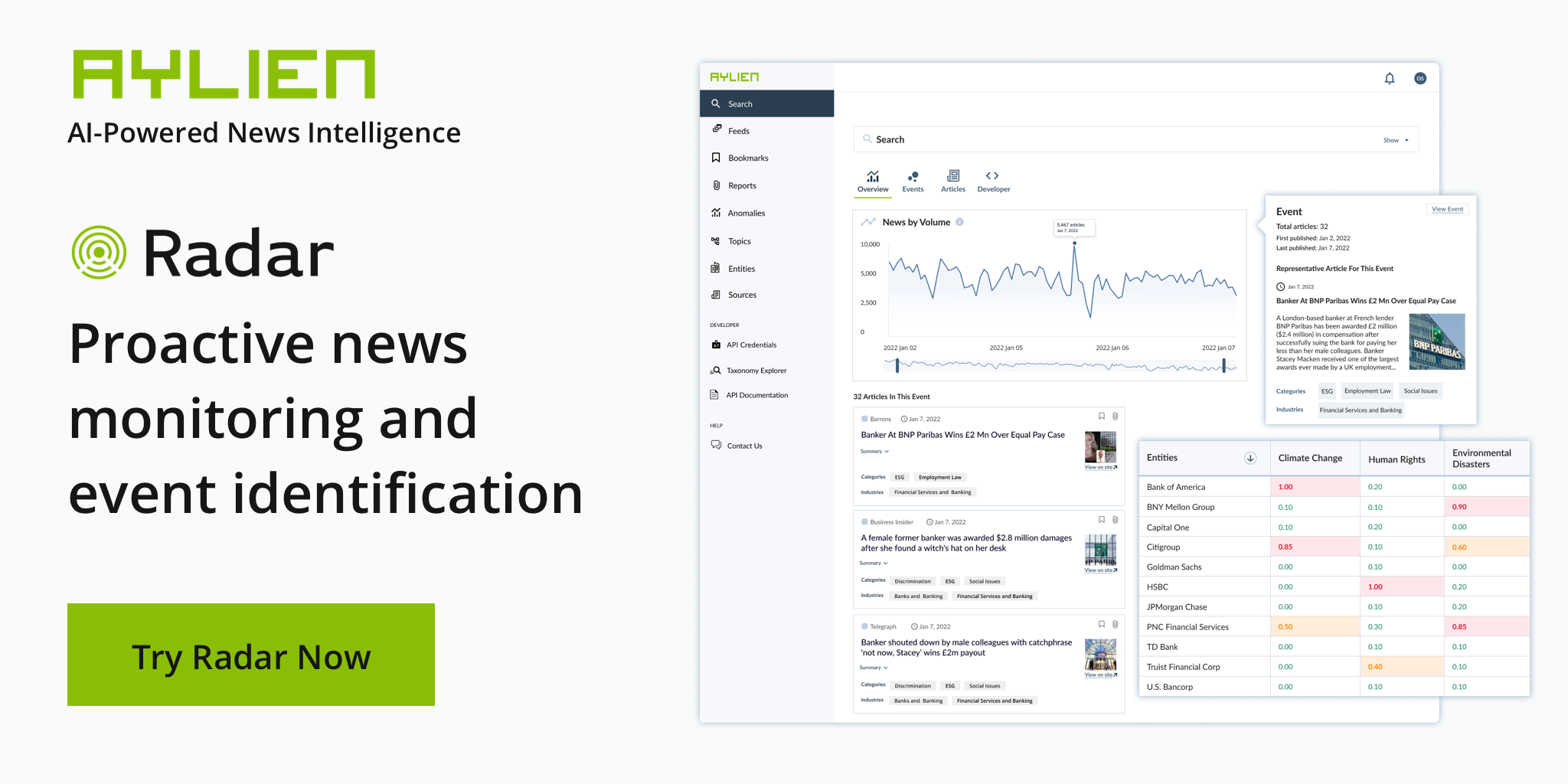