Sentiment analysis is an invaluable asset in an organisation’s media intelligence toolkit. It can be utilised to measure the success of campaigns, public reaction and monitoring crises. It acts as an acid test for public opinion and serves as a vital indicator of how a subject is perceived.

But what exactly is sentiment analysis? Using machine learning and natural language processing, text can be analysed to gauge whether the subject matter is being discussed in a positive, neutral or negative light. Doing this at scale across thousands of news publications and articles is therefore a powerful method of gauging how a topic is being perceived in the media and by extension, the public. Thanks to NLP, a task that would be manually insurmountable is made simple and instantaneous.

AYLIEN, however, is proud to announce the upcoming launch of Entity-Level Sentiment Analysis (ELSA). This means that sentiment analysis will not only be calculated at a holistic document level, individual sentiment scores will be calculated for all the entities that exist in the news article. This will provide our users with a far more focused and powerful method of analysing the entities that matter to them.

One topic that we thought was perfect to showcase the power of ELSA was the tightly contested US Election.

The campaign has been fraught and polarizing amongst the electorate and we were keen to see if this was borne out in the American media.

To do this, we pulled all news stories from US sources over the last 20 days that featured both Trump and Biden. Then, using our soon-to-be launched Enhanced Entity Search capabilities, we performed ELSA on both candidates to measure the volumes of positive, neutral and negative mentions of them across the media.

In the graph below, we have shown the volume of positive, negative and neutral sentiment news stories towards Trump and Biden. We can see spikes in volume on 23 October, the final presidential debate, and Tuesday 4 November, polling day.

At a glance, it is quickly apparent that Trump receives far more negative attention than Biden, who is discussed  in an overwhelmingly neutral light by the American media. But despite the volume of negative sentiment stories, Trump receives just as much positive sentiment as Biden, suggesting that discussion of Trump is polarizing.

It is also significant that the period after polling day is dominated by negative sentiment for Trump, most likely reflective of his false claims of voting irregularities.

Hover over the graph to compare sentiment over time and toggle between absolute values and percentage distribution of sentiment. 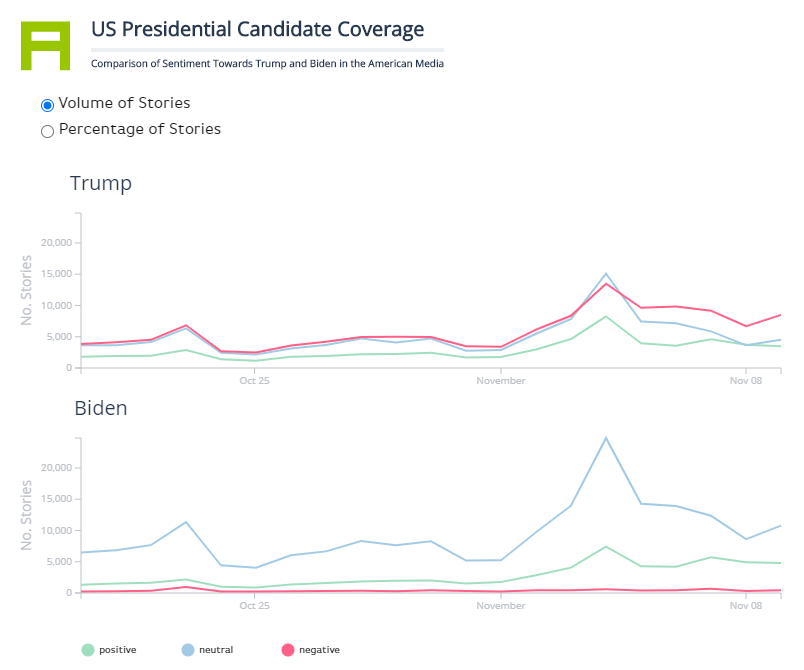 It is generally accepted that American media is often polarized along political lines; for example, left leaning CNN vs right leaning Fox News. We were curious to see would these political stances be demonstrated in a list of publishers’ sentiment shown towards Trump and Biden.

To do this, we pulled all the stories published by a list of major news outlets that featured both Trump and Biden entities and performed the same ELSA analysis for each. We then plotted average sentiment towards Trump along the x-axis where the rightmost side is positive and the left most side is negative. Similarly, we plotted the average sentiment towards Biden along the y-axis where the top side is positive and the bottom is negative. 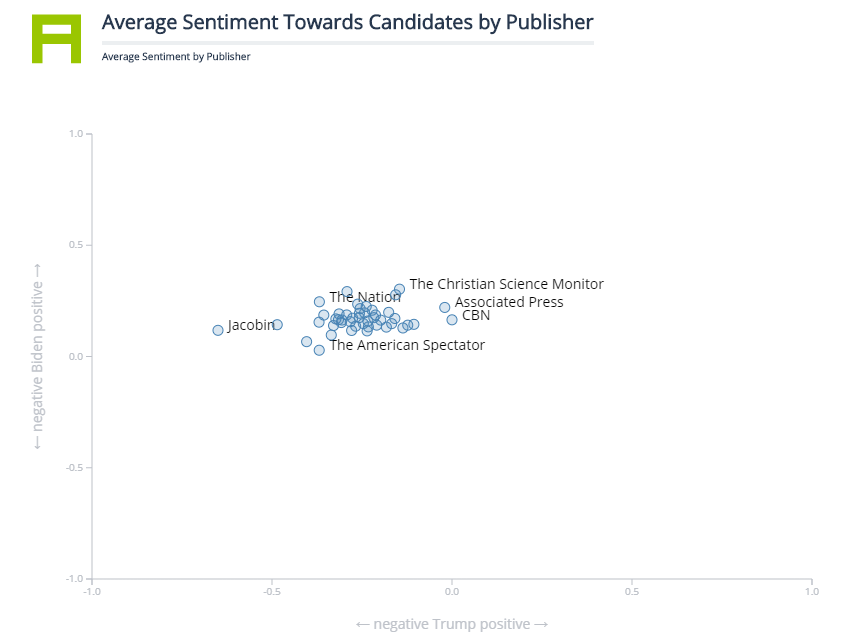 Below you can see a zoomed-in version of the same data showing publisher icons.

Sentiment analysis is an invaluable resource in a media monitoring toolkit, allowing us to check the pulse of the public on the topic of our choice. But document-level sentiment analysis is limited, providing an overall analysis of an entire article and missing the nuance and potentially polarized sentiments of the people, entities and companies within.

ELSA will provide the ability to analyse these entities in isolation, enabling our users to refine their search even further and derive more insights from the news that matters to them.

Sign up for a free trial of AYLIEN’s News API here, or request early access to Entity Level Sentiment Analysis by filling in the form below.