In this post, we are going to introduce you to the Support Vector Machine (SVM) machine learning algorithm. We will follow a similar process to our recent post Naive Bayes for Dummies; A Simple Explanation by keeping it short and not overly-technical. The aim is to give those of you who are new to machine learning a basic understanding of the key concepts of this algorithm.

Support Vector Machines - What are they?

A Support Vector Machine (SVM) is a supervised machine learning algorithm that can be employed for both classification and regression purposes. SVMs are more commonly used in classification problems and as such, this is what we will focus on in this post. SVMs are based on the idea of finding a hyperplane that best divides a dataset into two classes, as shown in the image below. 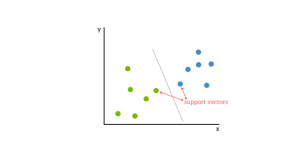 Support vectors are the data points nearest to the hyperplane, the points of a data set that, if removed, would alter the position of the dividing hyperplane. Because of this, they can be considered the critical elements of a data set.

What is a hyperplane?

As a simple example, for a classification task with only two features (like the image above), you can think of a hyperplane as a line that linearly separates and classifies a set of data. Intuitively, the further from the hyperplane our data points lie, the more confident we are that they have been correctly classified. We therefore want our data points to be as far away from the hyperplane as possible, while still being on the correct side of it. So when new testing data is added, whatever side of the hyperplane it lands will decide the class that we assign to it.

How do we find the right hyperplane? 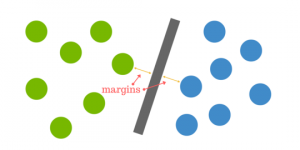 But what happens when there is no clear hyperplane?

This is where it can get tricky. Data is rarely ever as clean as our simple example above. A dataset will often look more like the jumbled balls below which represent a linearly non separable dataset. 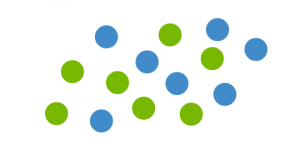 In order to classify a dataset like the one above it’s necessary to move away from a 2d view of the data to a 3d view. Explaining this is easiest with another simplified example. Imagine that our two sets of colored balls above are sitting on a sheet and this sheet is lifted suddenly, launching the balls into the air. While the balls are up in the air, you use the sheet to separate them. This ‘lifting’ of the balls represents the mapping of data into a higher dimension. This is known as kernelling. You can read more on Kerneling here. 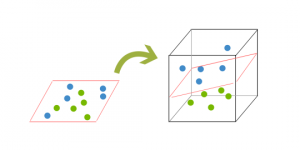 Because we are now in three dimensions, our hyperplane can no longer be a line. It must now be a plane as shown in the example above. The idea is that the data will continue to be mapped into higher and higher dimensions until a hyperplane can be formed to segregate it.

SVM is used for text classification tasks such as category assignment, detecting spam and sentiment analysis. It is also commonly used for image recognition challenges, performing particularly well in aspect-based recognition and color-based classification. SVM also plays a vital role in many areas of handwritten digit recognition, such as postal automation services. There you have it, a very high level introduction to Support Vector Machines.