In the age of a global economy, country risk has emerged as an important factor for businesses seeking to expand or monitor the safety of their investments.

Country risk covers the uncertainty connected with investing in a particular country, by understanding the level of uncertainty that could lead to losses. Typical country risks can vary from political risks such as warfare and civil unrest, economic risks such as sanctions and country debt, to criminal risks such as organized crime and corruption.

These environments can change rapidly, meaning quick and decisive action is often needed. However, using traditional reporting or monitoring processes means organizations rely predominantly on reactive measures when mitigating exposure to country risks. News intelligence can provide a valuable source of real-time analysis and can greatly inform an organization’s country risk management strategy by ensuring macro trends and emerging risks can be tracked and monitored pro-actively.

In this blog, we wanted to investigate country risk using our News API. There are many different definitions of country risk, but we utilized a general taxonomy of Political, Economic and Criminal risk. In this taxonomy, the three broad risk categories include various sub-groupings :

Using AYLIEN’s categories enrichment, we searched for articles that were tagged to IPTC codes that aligned with these subgroupings over a month’s time. We also limited to stories that mentioned a country entity in the title.

We did this for three reasons. Firstly, we wanted to have a broad high-level view of the entire world; we could search for stories mentioning countries as well as states and major cities in the title, but the volume of data output would be unwieldy, at least for a blog discussion. It should, however, be pointed out that some news would be more commonly reported at a granular city or state level than at country level e.g. Washington vs the United States. Secondly, by limiting to stories that mention a country in the title (rather than the body), we can be confident the article relates to that country. Thirdly, one can presume that an article title that includes a country has national or international significance so may include important signals.

In the visualizations below, every dot represents an individual risk story relating to a country. We have stacked the stories in squares to show volume by country and also displayed them as time series so we can see distribution over the month.

Needless to say, some countries returned more stories than others. This can be a result of several factors:

Regardless, this approach provides us with a effective means of discovering and investigating country risk events reported in the media

Tip: Hover over individual stories to find the story title. Using our clustering enrichment we have linked stories covering the same events. Hovering over stories will also highlight other stories belonging to the same cluster.

Not only has the killing of George Floyd caused outrage in the US, similar protests and acts of solidarity have taken place worldwide, as illustrated in the graph below. Note the dominance of blue political stories in each country, a trend we will see recurring in most countries. 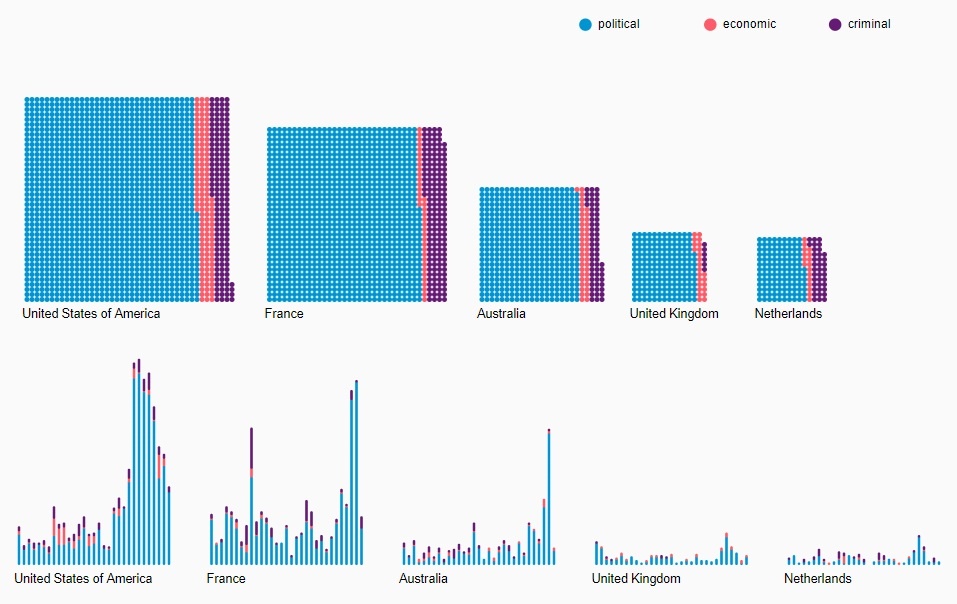 While the political risk category dominates in almost all countries, there are some countries that have a higher than average proportion of criminal risk stories. Mexico has by far the biggest proportion of criminal stories, mostly relating to drug cartels and gang violence. Similarly, Brazil and Malaysia see high volumes of drug trafficking stories.

News of the death penalty causes the surge in criminal stories in Singapore while the arrest of a suspect in the Rwandan genocide has caused high volumes in France. 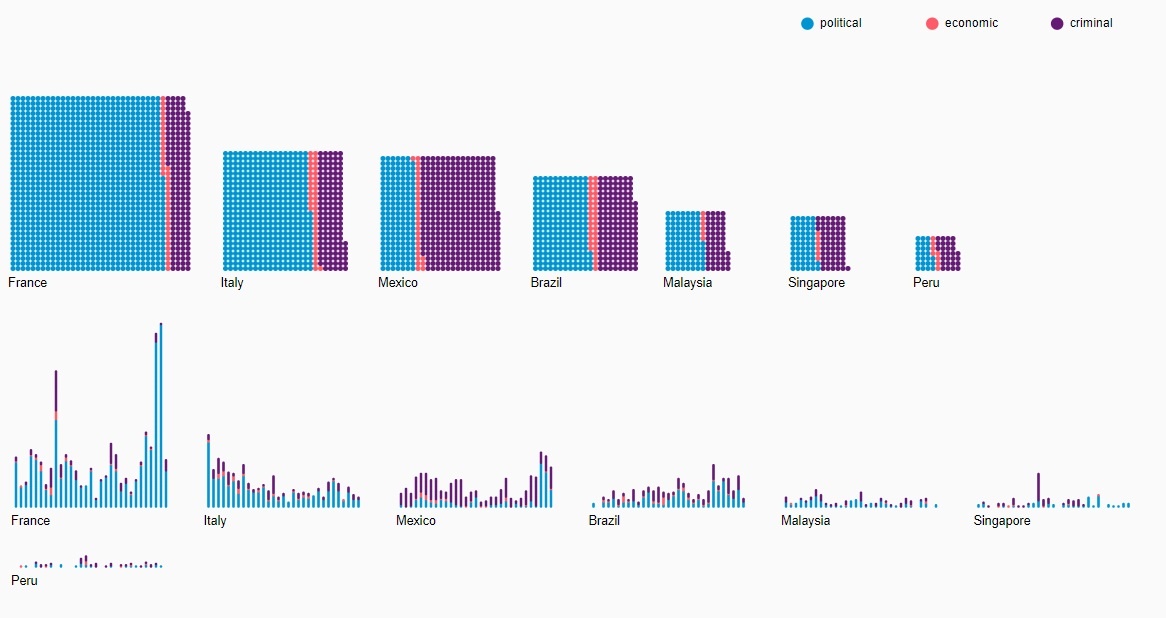 Elsewhere, we see some countries with prominent economic risk stories. Moody’s has downgraded India’s sovereign rating, while Iran has delivered oil to Venezuela despite US sanctions. Meanwhile a row between Korea and Japan regarding trade has been reignited with Korea launching a complaint to the World Trade Organisation.

Note also a large cluster of political risk news stories relating to an accusation of a failed US military coup in Venezuela. 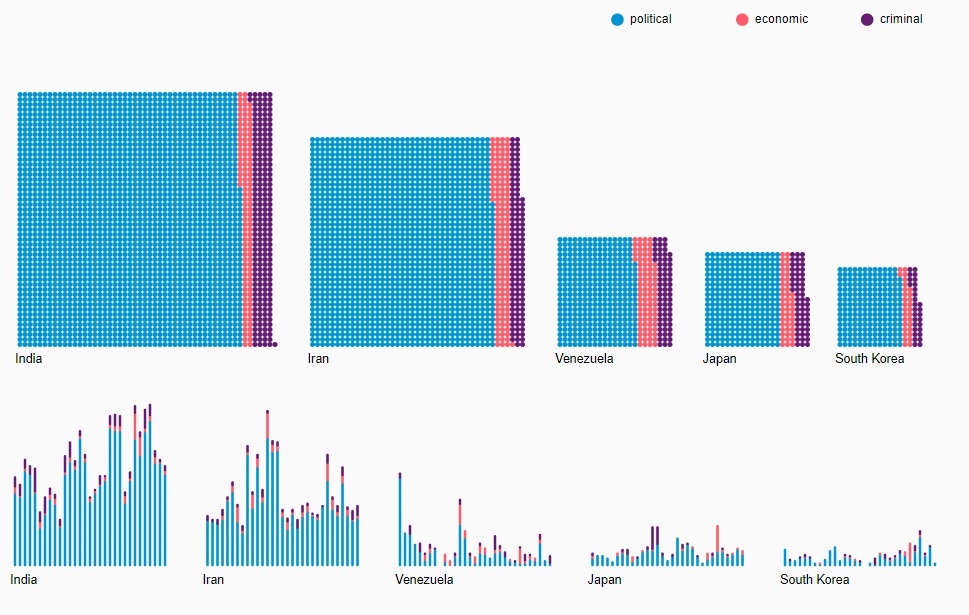 So far we have looked mostly at countries that are receiving a lot of coverage in the media, but these signals may seem obvious to anyone who keeps up to date on general news.

Below we have picked some countries with less media attention but that we deem are showing significant risk signals. To identify these countries, we collated all stories mentioning countries in the title and found the percentage of these stories that were tagged to our risk categories. Using this rough heuristic, we identified the countries with the highest proportion of risk stories associated with them over the last month.

This approach output some countries we know score badly on official risk indices e.g. Yemen and the Democratic Republic of Congo. However, it also highlights countries that might otherwise not be on our radar such as Transnistria and the Northern Mariana Islands, exemplify the merit of automated news intelligence. 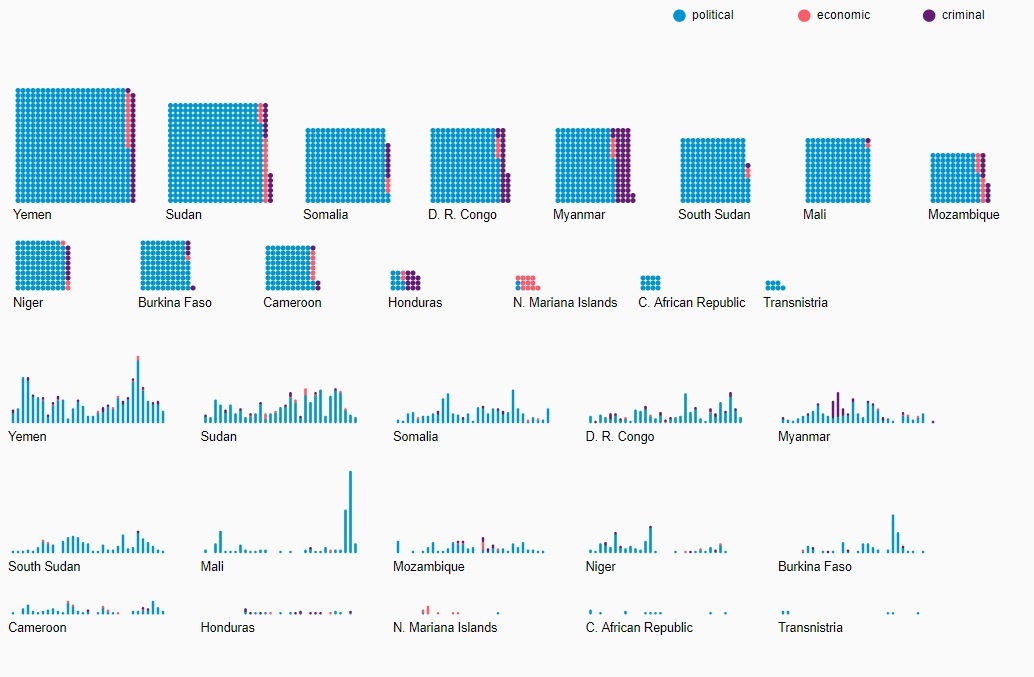 Undoubtedly, our country risk scanner could be improved by including more detailed topical searches and expanding our reach by including location-based searches at state and city level.

That said, even this rudimentary risk scanner has shown the merits of utilizing news intelligence in assessing country risk in real-time.