An Interactive History of Chatbots

Chatbots are a hot topic in tech at the moment. They’re at the center of a shift in how we communicate, so much so that they are central to the strategy and direction of major tech companies like Microsoft and Facebook. According to Satya Nadella, CEO of Microsoft, “Chatbots are the new apps”.

So why exactly have chatbots become so popular?

Their rise in popularity is partly connected to the resurgence of AI and its applications in industry, but it’s also down to our insatiable appetite for on-demand service and our shift to messaging apps over email and phone. A recent study found that 44% of US consumers would prefer to use chatbots over humans for customer relations, and 61% of those surveyed said they interact with a chatbot at least once a month. This is because they suit today’s consumers’ needs - they can respond to customer queries instantly, day or night.

Large brands and tech companies have recognised this shift in customer needs and now rely on messenger and intelligent assistants to provide a better experience for their customers. This is especially true since Facebook opened up its Messenger platform to third-party bots last year.

So while the adoption of intelligent assistants and chatbots is growing at a colossal rate, contrary to popular belief and media hype, they’re actually nothing new. We’ve had them for over fifty years in the Natural Language Processing community and they’re a great example of the core mission of NLP  - programming computers to understand how humans communicate.

In this blog, we’re going to show three different chatbots and let you interact with each bot so you can see how they have advanced. We'll give some slightly technical explanations of how each chatbot works so you can see how NLP works under the hood.

The three chatbots we’ve gathered on this page are: 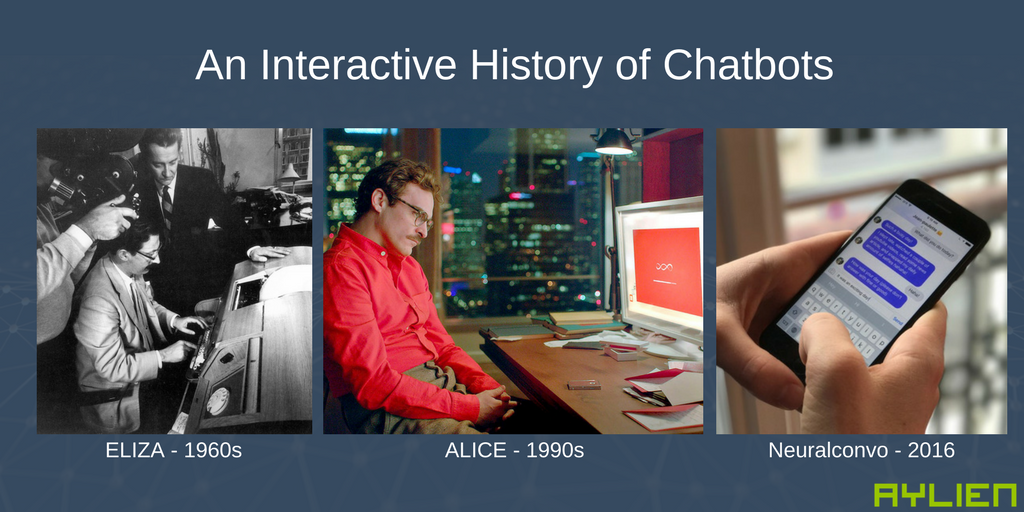 We should mention here that these three bots are all “chit-chat” bots, as opposed to “task-oriented” bots. Whereas task-oriented bots are built for a specific use like checking if an item is in stock or ordering a pizza, a chit-chat bot has no function other than imitating a real person for you to chat with. By seeing how chit-chat bots have advanced, you're going to see how the NLP community has used different methods to replicate human communication. 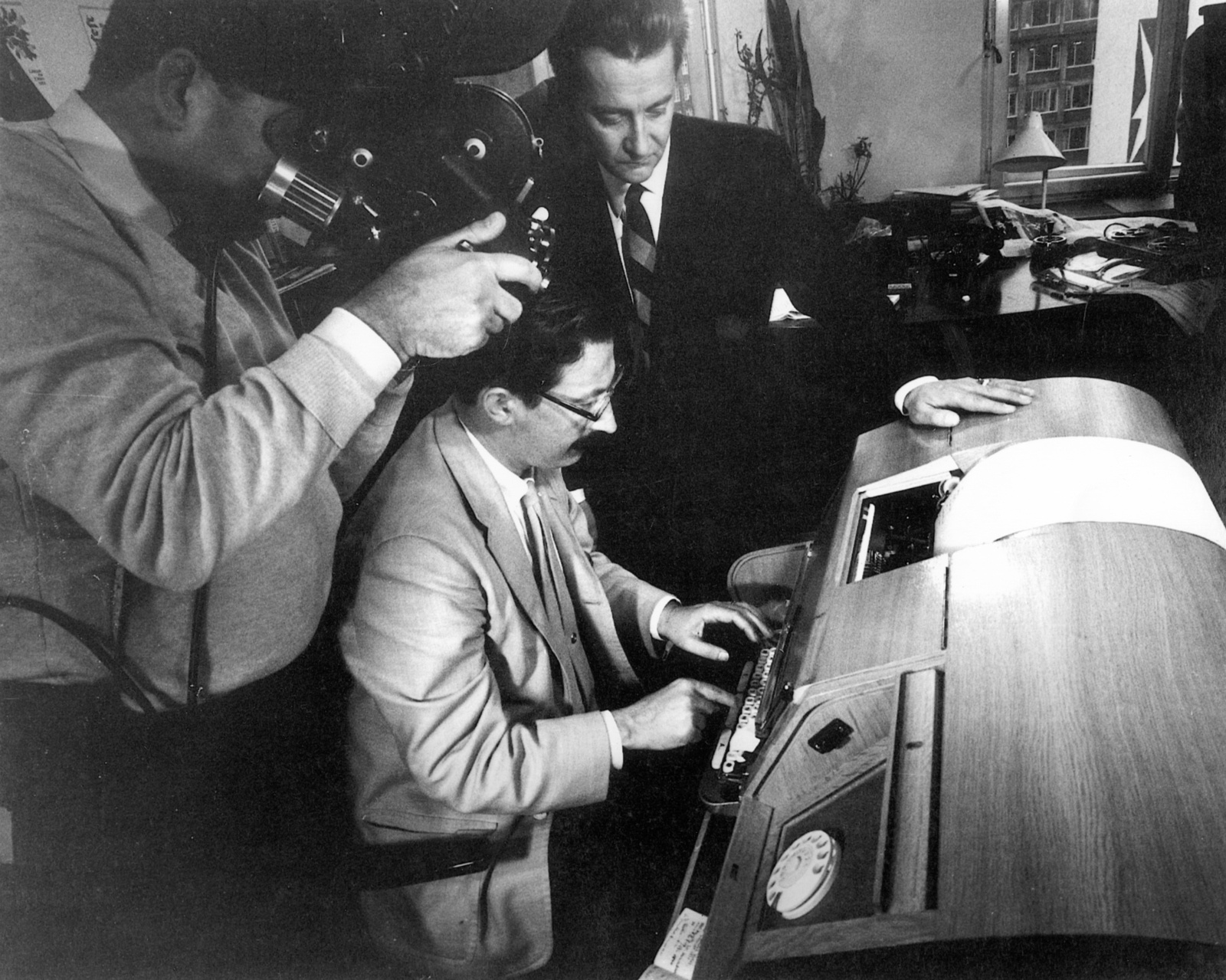 Just like any algorithm, chatbots work from rules that tell it how to take an input and produce an output. In the case of chatbots, the input is text you supply to it, and the output is text it returns back to you as a response. Looking at the responses you get from ELIZA, you’ll see two rough categories of rules:

Try and figure out some of ELIZA’s limits for yourself by asking it questions and trying to figure out why it’s returning each of its responses. Remember: it’s from the 1960s, when color televisions were the height of consumer technology.


This is a pure Natural Language Processing approach to building a chatbot: the bot understands human language by the rules mentioned above, which are basically grammar rules programmed into a computer. This achieves impressive results, but if you wanted to make ELIZA more human-like by pure NLP methods you would have to add more and more grammatical rules, and because grammar is complicated and contradictory, you would quickly end up with a sort of “rule spaghetti,” which wouldn’t work. This approach is in contrast with Machine Learning approaches to chatbots (and natural language in general), where an algorithm will try to guess the correct response based on observations it has made on other conversations. You can see this in action in the final chatbot, Neuralconvo. But first, ALICE.

ALICE - The star of the movie Her

Fast forward from the 1960s to the late 1990s and you meet ALICE, the first well-known chatbot that people could interact with online, and one that developed something of a cult reputation. Director Spike Jonze said that chatting with ALICE in the early 2000s first put the idea for his 2013 film Her in his mind, a movie where a man falls in love with the AI that powers his operating system. 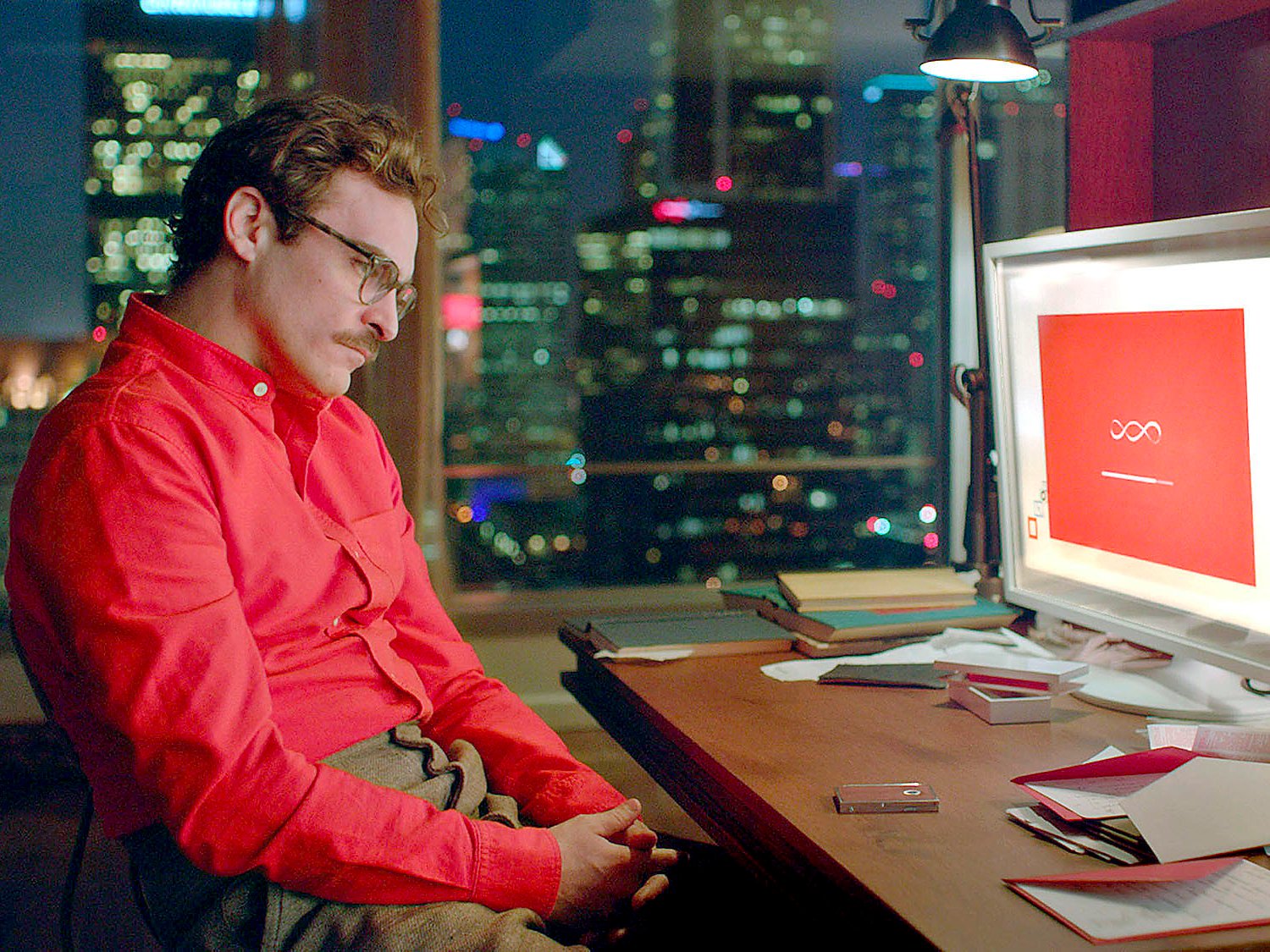 But just like ELIZA, this is a computer program made up of rules that take an input and produce an output. Under the hood, ALICE is an advance on ELIZA in three respects:

ALICE is an open source bot, one that anyone can download and modify or contribute to. Written originally by Dr. Richard Wallace, over 500 volunteers have contributed to the bot, creating 100,000s of lines of AIML for ALICE to reproduce in conversation. So ALICE’s improvements on ELIZA allow for more responses that are better tailored to the text you are supplying it with. This allows ALICE to impersonate a person in general, rather than a therapist specifically. The problem here is that the shortcomings are now more obvious - without open ended statements and questions, the lack of a response that matches your input is more obvious. Explore this for yourself below.

So even though ALICE is a more advanced chatbot than ELIZA, the output responses are still written by people, and algorithms choose which output best suits the input. Essentially, people type out the responses and write the algorithms that choose which of these responses will be returned in the hope of mimicking an actual conversation.

Improving the performance and intelligence of chatbots is a popular research area and much of the recent interest in advancing chatbots has been around Deep Learning. Applying Deep Learning to chatbots seems likely to massively improve a chatbot’s ability to interact more like a human. Whereas ELIZA and ALICE reproduce text that was originally written by a person, a Deep Learning bot creates its own text from scratch, based on human speech it has analyzed.

One such bot is Neuralconvo, a modern chatbot created in 2016 by Julien Chaumond and Clément Delangue, co-founders of Huggingface, which was trained using Deep Learning. Deep Learning is a method of training computers to learn patterns in data by using deep neural networks. It is enabling huge breakthroughs in computer science, particularly in AI, and more recently NLP. When applied to chatbots, Deep Learning allows programs to select a response or even to generate entirely new text.

Neuralconvo can come up with its own text because it has “learned” by reading thousands of movie scripts and recognizing patterns in the text. So when Neuralconvo reads a sentence it recognizes patterns in your text, refers back to its training to look for similar patterns, and then generates a new sentence for you that it thinks would follow your sentence if it were in the movie scripts in a conversational manner. It’s basically trying to be cool based on movies it’s seen.

The fundamental difference between ELIZA and Neuralconvo is this: whereas ELIZA was programmed to respond to specific keywords in your input with specific responses, Neuralconvo is making guesses based on probabilities it has observed in movie scripts. So there are no rules telling Neuralconvo to respond to a question a certain way, for example, but the possibilities of its answers are limitless.

Considering Neuralconvo is trained on movie scripts, you’ll see that its responses are suitably dramatic.

The exact model that is working under the hood here is based on the Sequence to Sequence architecture, which was first applied to generate dialogue by Quoc Viet Le and Oriol Vinyals. This architecture consists of two parts: the first one encodes your sentence into a vector, which is basically a code that represents the text. After the entire input text has been encoded this way, the second part then decodes that vector and produces the answer word-by-word by predicting each word that is most likely to come next.

Neuralconvo isn’t going to fool you into thinking that it is a person anytime soon, since it is just a demo of a bot trained on movie scripts. But imagine how effective a bot like this could be when trained using context-specific data, like your own SMS or WhatsApp messages. That’s what’s on the horizon for chatbots, but remember - they will still be algorithms taking your text as input, referring to rules, and returning different text as an output.

Well that sums up our lightning tour of chatbots from the 1960s to today. If you’re interested in blogs about technical topics like training AI to play Flappy Bird or why you should open-source your code>, take a look at the Research section of our blog, where our research scientists and engineers post about what interests them.