Highlights of EMNLP 2017: Exciting Datasets, Return of the Clusters, and More!

Four members of our research team spent the past week at the Conference on Empirical Methods in Natural Language Processing (EMNLP 2017) in Copenhagen, Denmark. The conference handbook can be found here and the proceedings can be found here. The program consisted of two days of workshops and tutorials and three days of main conference. The conference was superbly organized, had a great venue, and a social event with fireworks. 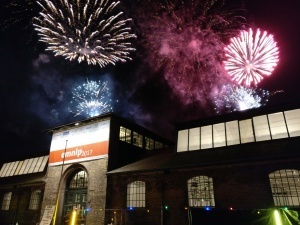 Figure 1: Fireworks at the social event

With 225 long papers, 107 papers, and 9 TACL papers accepted, there was a clear uptick of submissions compared to last year. The number of long and short paper submissions to EMNLP this year was even higher than those at ACL for the first time within the last 13 years, as can be seen in Figure 2. 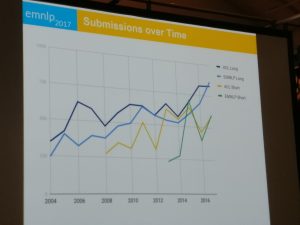 In the following, we will outline our highlights and list some research papers that caught our eye. We will first list overall themes and will then touch upon specific research topics that are in line with our areas of focus. Also, we're proud to say that we had four papers accepted to the conference and workshops this year! If you want to see the AYLIEN team's research, check out the research sections of our website and our blog. With that said, let's jump in!

Evaluating your approach on CoNLL-2003 or PTB is appropriate for comparing against previous state-of-the-art, but kind of boring. The two following papers introduce datasets that allow you to test your model in more exciting settings: 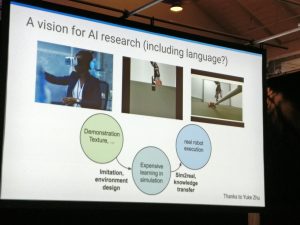 Return of the Clusters

Brown clusters, an agglomerative, hierarchical clustering of word types based on contexts that was introduced in 1992 seem to come in vogue again. They were found to be particularly helpful for cross-lingual applications, while clusters were key features in several approaches: 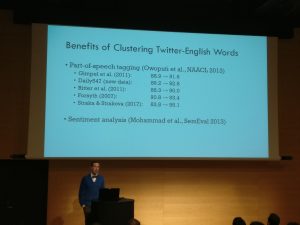 Figure 4: Noah Smith on the benefits of clustering in his invited talk at the SCLeM workshop

Distant supervision can be leveraged to collect large amounts of noisy training data, which can be useful in many applications. Some papers used novel forms of distant supervision to create new corpora or to train a model more effectively:

The current generation of deep learning models is excellent at learning from data. However, we often do not pay much attention to the actual data our model is using. In many settings, we can improve upon the model by selecting the most relevant data:

Characters are nowadays used as standard features in most sequence models. The Subword and Character-level Models in NLP workshop discussed approaches in more detail, with invited talks on subword language models and character-level NMT. 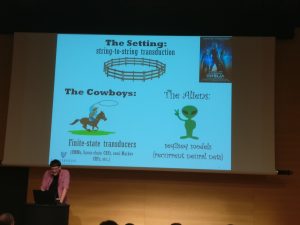 Research in word embeddings has matured and now mainly tries to 1) address deficits of word2vec, such as its ability of dealing with OOV words; 2) extend it to new settings, e.g. modelling the relations of words over time; and 3) understand the induced representations better:

An increasing number of papers evaluate their methods on multiple languages. In addition, there was an excellent tutorial on cross-lingual word representations, which summarized and tried to unify much of the existing literature. Slides of the tutorial are available here. 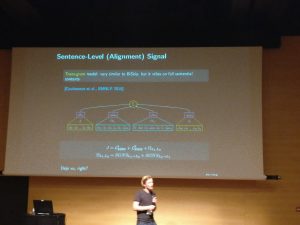 The Workshop on New Frontiers of Summarization brought researchers together to discuss key issues related to automatic summarization. Much of the research on summarization sought to develop new datasets and tasks:

Data and model-inherent bias is an issue that is receiving more attention in the community. Some papers investigate and propose methods to address the bias in certain datasets and evaluations: 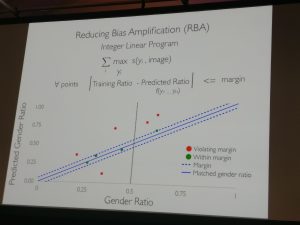 Argument mining is closely related to summarization. In order to summarize argumentative texts, we have to understand claims and their justifications. This research area had the 4th Workshop on Argument Mining dedicated to it:

Multi-agent communication is a niche topic, which has nevertheless received some recent interest, notably in the representation learning community. Most papers deal with a scenario where two agents play a communicative referential game. The task is interesting, as the agents are required to cooperate and have been observed to develop a common pseudo-language in the process. 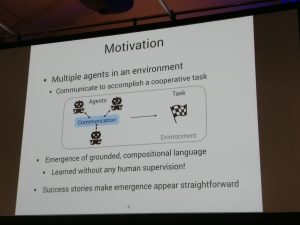 Figure 8: The multi-agent setup in the paper of Kottur et al.

These were our highlights. Naturally, we weren’t able to attend every session and see every paper. What were your highlights from the conference or which papers from the proceedings did you like most? Let us know in the comments below.